It’s a tough job being a Sailing Secretary. Long hours for little reward other than seeing the happy smiling faces of the sailors as they heave their boats up the beach.
If you are a Sailing Sec then SailEvent can make your life easier by letting sailors take on a little more responsibility.
And now SailEvent gives you the chance to delegate some of your work to trusted colleagues by giving them access to the Club App.
We’ve just added a new Additional Users page, opened from the Club App menu via >Admin >Additional Users. There you can add people to a list. Once on the list they can log in in the usual way using their email address. And once logged in they can use the Club App in exactly the same way as the primary club login.
Each user in the list has a name and an email address. The address is used for logging in and the name is simply for identification. When you add someone to the list SailEvent sends them a welcoming email with instructions on how to proceed.
Once in the app a user can give him or herself a password to shorten the login process and confirm deletes.
Unlike a club’s primary email address, additional user addresses do not have to be unique within SailEvent so potentially one person can access multiple accounts.
What’s more you as Sailing Secretary can now have two logins – one for the office and one for home – so you can get on with the job wherever you are!
Posted by SailEvent at 16:25 1 comment:

Now you see it, now you don’t

I just want to tell you about a handy new setting for competitions that we introduced recently.
It’s called Visible and it controls where in SailEvent people can see each competition. You’ll find it at the bottom of the Competition tab on the >Competitions page.
Visible has three possible settings:
All The competition can be seen in the public location Viewer and the Race Team App as well of course in the main Club App. This is the initial setting for a new competition.
Not Viewer The competition can be seen in the Club and Race Team Apps but not in the public Viewer. This might be an appropriate setting for, say, club racing.
Club App only The competition is visible only in the Club App. You might want to use this while you are setting up a new competition or trying something out.
Why no Not Race Team? Because we couldn’t think of a use for it! Plus you can control who sees what in the Race Team App per session with PINs.
And that’s all there is to it. If you change Visible don’t forget to Save it.
Posted by SailEvent at 13:57 No comments:

The first few weeks after launching a new service on the web are always an interesting time. SailEvent's introduction has been no exception!

No matter how much you test and check in the lab, once out in the wild there are all manner of unforeseeable pitfalls awaiting young and innocent software. SailEvent has been buffeted by web browsers and operating systems but, fingers crossed, those travails are all behind us now. If you’ve been caught out by any of them, please accept our apologies and thank you for sticking with it.

On a more constructive note, we have received much useful feedback from early adopters. Several ideas have been filed away for future development; others have been implemented already. Some changes are so minor you may not even notice them but more significant are

And to accommodate additional stuff now and in the future, SailEvent has a new menu system. Hope you like it.

Today clubs can use SailEvent entirely for free while they get going again after the lockdown. But what happens after some form of normality returns? In this post we share our thoughts on SailEvent pricing.
SailEvent is a service of Sailing Club Software and Sailing Club Software is a commercial organisation. There are costs to operating software-as-a-service so to be viable SailEvent must cover those costs and provide a modest return on our investment. That’s why we ultimately plan to migrate SailEvent club accounts to a freemium model. Sailor accounts will continue to be free.
Freemium is a well-established approach offering software in a series of tiers. The first tier is free and provides basic functionality with limited capacity – think of it as an ongoing starter pack. Subsequent tiers offer more features and greater capacity in return for corresponding subscription levels.
So that’s our target. When we get there, how the tiers look and what the subs will be are as yet unknown. With a new service in uncertain times it would be unwise of us to make commitments now. What we can promise is that the service will always be affordable otherwise nobody would be able to afford it!
So please keep on using SailEvent free of charge for now and we’ll give you plenty of warning of the move to freemium.
Posted by SailEvent at 14:09 No comments:

Where is everyone? SailEvent and GPS Tracking

Traditionally human vision has been the only way to know where sailors are when on the water. But now we can improve on that with GPS tracking.
Tracking is ubiquitous. You can track your pets and your parents, your car and your bike and your luggage. You can watch your loved one coming home from work and your delivery on its way from the warehouse. Major sailing events also use tracking and SailEvent now makes this tech available to every club and sailor as its eLocate feature.
What SailEvent does not attempt to do is present second-by-second updates or show tracks taken. Instead eLocate records competitors' most recently reported GPS position.  These are plotted on a map of your sailing area in the club and race team apps. Race officers not only get an overview of where the fleet is but can also check the location of individual competitors.
The latter is really useful when tracking down anyone hasn’t eTallied ashore. For instance this person has simply forgotten and is on his way home! 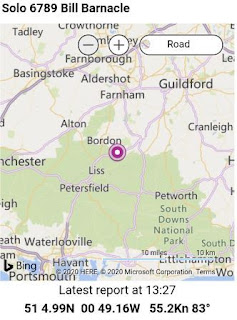 But it would be a different story if he was shown in the middle of the bay or lake, or on the far shore. Further investigation would be advisable.
Competitor locations are also available anonymously on a public viewer so spectators can follow the action.

How does this all happen?

Clubs don’t have to do anything! It's built in to the SailEvent service and the strategy is to let sailors opt in to use it if they want to. They provide their own tracking device as either a mobile phone for free or by investing in a dedicated tracker. Device options and configuration are on the sailor fact sheet page.

It’s new, it’s unexpected, it’s a bit geekish, it requires effort so there will be resistance from some. But that doesn’t mean that technophiles can’t give it a go.

GPS tracking is not going to go away; it can’t be uninvented. That’s why SailEvent offers sailors the opportunity to make this small addition to their safety portfolio if they choose.

In this post we’ve shown that GPS tracking in the context of a sailing event is now available to those who want to take advantage of it. This is a new and developing subject and we look forward to working with the sailing community to maximise the effectiveness of this useful technology.
Posted by SailEvent at 14:31 No comments:

Signing out and in by phone

The SailEvent eTally feature lets sailors sign out and in on their phones. But what is it that they are signing out and in of?
SailEvent defines sailing sessions. Typically a session is a sailing day but equally it could be, say, a morning session or an evening session. A session is what you make it and what people sign for.
Each session has a name, a date and a start and end time. It also has one or more competitions assigned to it. Competitions have competitors so at the beginning of each session SailEvent can list all the competitors who are potentially sailing in that session. We call them participants. eTally lets participants report that they are actually sailing. For the avoidance of ambiguity we call that signing afloat.
SailEvent collates all the eTally signed afloats and presents them in real time as a definitive list in the club and race team apps.
Let’s have a look at this from a sailor’s perspective. Bill Barnacle's club has a Leisure Sailing competition and Bill has entered. Bill has also registered with SailEvent as a sailor and opted in to receiving prompts – simple reminders – by email. His club creates a sailing session, Day 1, on 5th July starting at 0900 and ending at 1500.
At 0900 on 5th July Bill gets an email on his phone saying “click this link if you are sailing today”. Bill clicks the link and sees 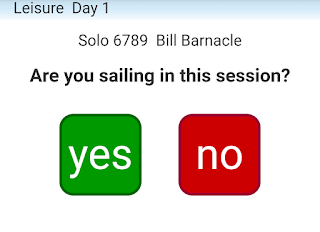 Bill taps yes. This is instantly recorded by SailEvent and shown as a tick against Bill's name in the list of today’s participants. (If Bill has a look at the forecast and changes his mind he can go back and tap no.)
It's a similar story after sailing. Bill can tap the same link to say he has finished sailing. If he doesn’t he is prompted as 1500, the session end time, approaches. He sees 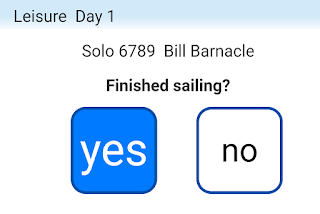 That’s the simplest version of signing ashore; it can also be configured to ask for a Finished/DNC/DNF declaration or even for finish times.
Again Bill is marked off as being ashore and the race team can answer that crucial question – who has gone afloat but isn’t ashore.
In this post we’ve seen how sailors can use their phones to report their afloat/ashore status and avoid the pinch point of signing sheets. And just as importantly we’ve also seen how that status is available to race teams in real time. Next we’ll look at monitoring sailors while on the water.
Posted by SailEvent at 14:45 No comments:

This post is for all you sailors to encourage you to register yourself with SailEvent. The process is relatively painless, takes only a few minutes and it’s free.

Why do we want you to register? To collect your email addresses. Not to sell on, not to bombard you with ads (our Privacy Policy confirms that unequivocally) but to connect you to events and competitions run by SailEvent-registered clubs.

What’s in it for sailors?

Either go direct to https://sailevent.net/app/sailor/register or there are links on the SailEvent website.

Then it’s the familiar process of you submit your email address, SailEvent sends you an email with a link in it. You click the link, accept the Terms of Use (after reading them carefully of course) and you are into the Registration Wizard.

The wizard takes you through the process. The steps are:

All done. To get back to your account to check or update it, it’s https://sailevent.net/app/sailor/login or via the SailEvent website.


Once registered you will hear no more from SailEvent until you are entered in one of those SailEvent-registered competitions. If that doesn’t happen it probably means your club isn’t itself registered. You may want to encourage it to do so!

Posted by SailEvent at 14:29 No comments: